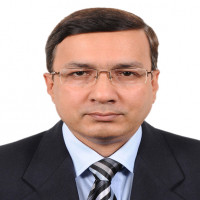 Dr. Kabir carried out three post-doctoral research with Alexander von Humboldt Fellowship in Germany for a total duration of three years.  He studied the ‘kinetics and mechanism for the pyrolysis and combustion of 1-Butanol’ at the German Aerospace Centre (DLR), Stuttgart with Professor Dr. rer. nat. Clemens Naumann.  He also investigated the ‘thermal stability of acylperoxy nitrates’ and ‘nitrate formation in the reaction of 1-nonylperoxy radicals with NO’ at the Institute of Physical Chemistry, University of Stuttgart, Germany with Professor Dr. rer. nat. Friedhelm Zabel.

Dr. Kabir completed his Ph.D. in Chemistry, 1997 at the University of Cambridge, England, and his M. Sc. (Chemistry) and B. Sc. (Hons.) at the Department of Chemistry, Jahangirnagar University.  He received the ‘Presidents’ Award (1988)’ for his outstanding result in undergraduate and graduate studies.  His Ph.D. research was the ‘time-resolved kinetic studies of ground state carbon and electronically excited germanium atoms by resonance absorption spectroscopy’ under the supervision of Dr. David Husain.

His research interests lie in the area of Physical Chemistry, Atmospheric, and Environmental Chemistry.  In recent years Dr. Kabir, in his research, has been focusing on environmental problems and their mitigations.  He is investigating the degradation of dyes used in various textile and colour industries.  He is also exploring the biogeochemical cycling of nutrients and contaminants in various natural and perturbed environments, particularly in saline soils.  He has collaborated actively with several other researchers in allied disciplines.  He has participated in several conferences and workshops both at home and abroad.

Dr. Kabir is also a Member of the editorial board of the Journal of Bangladesh Chemical Society (JBCS).  He has served as an active member of a committee under HEQEP, a project funded by the World Bank and the Government of Bangladesh, to design the learning objective base curriculum of the Department of Chemistry, JU.  He has served as the Principal Investigator (PI) for several projects from the Ministry of Science and Technology (MOST) and the University Grant Commission (UGC).  He is working as a Member of the Senate, JU, an Executive Member of the Bangladesh Chemical Society (BCS), and Treasurer of the ‘Association of Alexander von Humboldt Fellows in Bangladesh’, and also an Executive Member of the ‘Alumni Association of the German Universities in Bangladesh’.

Institute: Department of Chemistry, University of Cambridge (UK)
Period: 1993 to 1996

Thesis title: “Time-resolved kinetic studies of ground state carbon and electronically excited germanium atoms by resonance absorption spectroscopy”.  This is a kinetic investigation of the collisional behaviour of atomic carbon and germanium at specific electronic states with various reactants by time-resolved atomic resonance absorption spectroscopy in UV and vacuum UV.  The major apparatus includes a vacuum gas handling system, a flash lamp, a monochromator fitted with a photomultiplier tube, fast electronic data capture, and storage system, and a microcomputer for the display and analysis of the experimental data.  Supervisor: Dr. David Husain (Late).


Master of Science (MSc) in Chemistry

A thesis titled “Kinetics and mechanism of acid catalysed hydrolysis of hydrazones derived from 2,4-Dinitrophenylhydrazines” was submitted for partial fulfillment of MSc.  The works involved the preparation of substituted benzaldehyde 2,4-dinitrophenyl¬hydrazones and then study the rate and mechanism of acid catalysed hydrolysis of the hydrazones by spectrophotometric method.  The activation and thermodynamic parameters were calcu¬lated and a Hammett plot was drawn for the reactions.

Organization: Jahangirnagar University
Position: Member of the Senate
Period: 2006 - 2009 and 2016 to Present Date